The Scotsman
The Courier 12th January 19 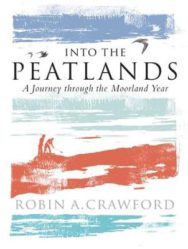 INTO THE PEATLANDS: A JOURNEY THROUGH THE MOORLAND YEAR

‘She was taken out onto the moor where the family had for generations cut the thick, muddy peat to burn as fuel. At a particular spot the top turf was removed for her and there, preserved in the peat, was a footprint – it was the footprint of her father, Angus Gillies.’

In this fascinating book, Robin Crawford explores the peatlands of the Hebrides over the course of the year, using the seasons to show how the story of peat is also the story of Scotland, from its first uses during the Bronze Age, through the wildlife and folklore associated with the land during the centuries, to its integral role in the making of whisky. He also looks at the historical, social and cultural importance that peat has played in the lives of many, bringing an emotional resonance to our dark, desolate landscapes.

Extract from Into The Peatlands: A Journey Into the Moorland Year

By Robin A. Crawford

Angus Gillies is just one of hundreds of thousands, probably millions, who have emigrated from the peatlands of Scotland. He was born about on the Hebridean island of Lewis, but like so many before and since he sought a new and better life far away on the other side of the Atlantic. It was an ocean he knew well; twice a day it would either softly wash up the island’s beautiful white sandy beaches sparkling luminously turquoise, or crash mercilessly against the ancient rocky cliffs, threatening destruction – sometimes both.

Angus (Aonghas an Gillies in the Scottish Gaelic his people spoke) grew up in Kirkibost, a township of small, self-sufficient farmsteads or crofts on the Atlantic seaboard, and must have gazed over the ocean all his life. People had been living a similar lifestyle on its edge since at least the Iron Age 3000 years earlier – and probably for longer – growing a few crops, pasturing their livestock on the island’s vast moors, taking what they could from the sea and shore. But by the mid-nineteenth century that way of life was under threat as never before and, like so many across the Scottish peatlands, islanders were drawn or forced out to the ever-expanding industrial towns and cities of the mainland, to the central Lowlands, London, the Americas and across the British Empire in the hope of a better life. They were victims of a society in flux, experiencing massive social changes following the Industrial Revolution, fleeing poverty, famine, family feud, clearance, dictatorial landlords, oppressive tradition and constricting religion. It was a huge risk to leave for life on the other side of the world, and for some it was fatal, but to stay would have been impossible. So, aged about twenty, he left. Never to return.

More than a century later Marion Laitner, an American, aged ninety, visited Kirkibost. Through family history research she had discovered that she had second, third and fourth cousins living there and as she was reaching the end of her long life she wanted to see the place where her people had originated and the setting for so many of the tales passed down to her. She was welcomed – as so many are – with the generous hospitality of the island and the joy of family reunited, but a further surprise was in store. She was taken out onto the moor where the family had for generations cut the thick, muddy peat to burn as fuel. At a particular spot the top turf was removed for her and there, preserved in the peat, was a footprint – it was the footprint of her father, Angus Gillies.

As she placed her own foot beside the preserved print her cousins explained that on the day before he left his mother had given him a creel and sent Angus out to the bank to collect some peats. Then he was off, like so many of the young islanders. She was desolate at his leaving, but she had to cope the best she could. Life went on.

On her next trip out to the peat bank to collect fuel she discovered one of his footprints there. As the only memento she had of her son she covered the print with turf, and after she died new generations of the family preserved the footprint until that day more than a century later when his daughter returned to her father’s homeland.

Into The Peatlands: A Journey Into the Moorland Year by Robin A. Crawford is published by Birlinn Ltd, and is £12.99.