On Twitter I hear the spring chorus lauding the croaking of frogs; the rising notes of the meadow pipit praised to the blue, summer heavens; autumnal foghorn bellowings about the ‘majestic’ rutting stag but on a Saturday evening there is now a wintery silence across Scotland’s peatlands. Many who claim to know the nature of these places have never heard the forenenst of its sounds.

But to those reeling round a twisting Barra coast road- on one side the silent water lilies, quietened baby potatoes tucked up early in their sandy lazybeds, on the other the metronomic, tidal monotony of the crashing Atlantic- listening to the mini-bus radio on the way to the Castlebay bar have heard it. At the opposite end of the Long Isle those swinging into John Campbell’s kitchen to get warm in front of the peat-fired Rayburn on a whispering misty evening at the Butt of Lewis, the air crackling as he fiddles to get a decent reception, will have heard it. The Pentland crofter with her intelligent hands stripping the pollarded willow which for generations her family have woven into creels or the teenager Strathspey-ing lopsidedly to an accordion set whilst trying to stop the half-bottle dancing out of their hip pocket at a Kirkmichael ceilidh have heard it. For the worker trying to scrape a living on a black November night, skimming the surface off a Flow Country peat bog by floodlight- up and down, up and down- in the lonely cab of the tractor it brought intricacies of movement, dashing sparks of witty conversation. To the Morayshire widow in the Glasgow housing scheme forced to hear the drumming of junkies on the security gates of the close and wheel spins of the boy racers in the road outside, too frightened to leave her home it was comfort, part of a weekend trinity with ‘The Sunday Post’ and the Sabbath, that brought a voice and language from happier times.

Where once there was a hairst o’ fine an’ couthy banter, the joyful sound of people dancing there has been an extinction. Silence. And on BBC Radio Scotland the mellifluous Doric tones of Robbie Shepherd no longer invite that most musical (and rare) of peatland creatures on a Saturday evening to “Take the floor.” 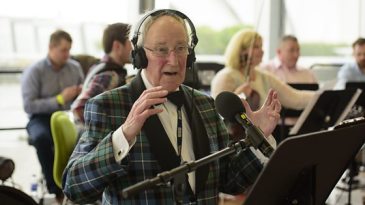